After serving as an Air Force navigator in World War II, Larry Goodman founded the Community Discount Store chain in 1946. 17 years later, he sold the company as a 35-store chain. Today, the original concept of the Community Discount Store serves as the forerunner of the modern self-service discount department store. In 1965, Mr. Goodman established the Goodman Group and American Asset Management Services, a commercial real estate firm that owns and operates office buildings and shopping centers in seven states.

As founder and chairman of the Lillian and Larry Goodman Foundations, Mr. Goodman is deeply involved in directing the organization’s funding causes. He made his first trip to Israel in 1958, and has since made numerous trips to the Jewish state with his wife, Lillian. Sharing David Ben-Gurion’s vision of revitalizing Israel’s Negev region, Mr. Goodman has directed significant funding to improving the quality of life in this growing area.

In the United States, Mr. Goodman is deeply committed to funding Jewish causes, hunger relief and drug abuse prevention. To honor the memory of his granddaughter, Cebrin, who died after battling drug addiction, he established the Cebrin Goodman Center to help prevent drug abuse in young people and allow them to fulfill their individual potential.

Mr. Goodman has also taken a leadership role with numerous organizations which are dedicated to improving Jewish life worldwide. His many affiliations include: Board of Governors of Ben-Gurion University, where he also received an honorary Doctorate; Chairman of the Midwest Region of Israel Bonds; Past Chairman and Executive Board of America-Israel Chamber of Commerce; Board of Joint Distribution Committee; Past Board of Jewish Federation of Metropolitan Chicago: Board of Trustees of Illinois Holocaust Museum and Education Center, and Chairman of American Friends of the Be’er-Sheva Foundation. 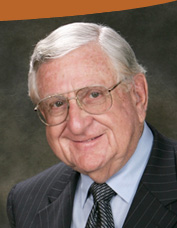